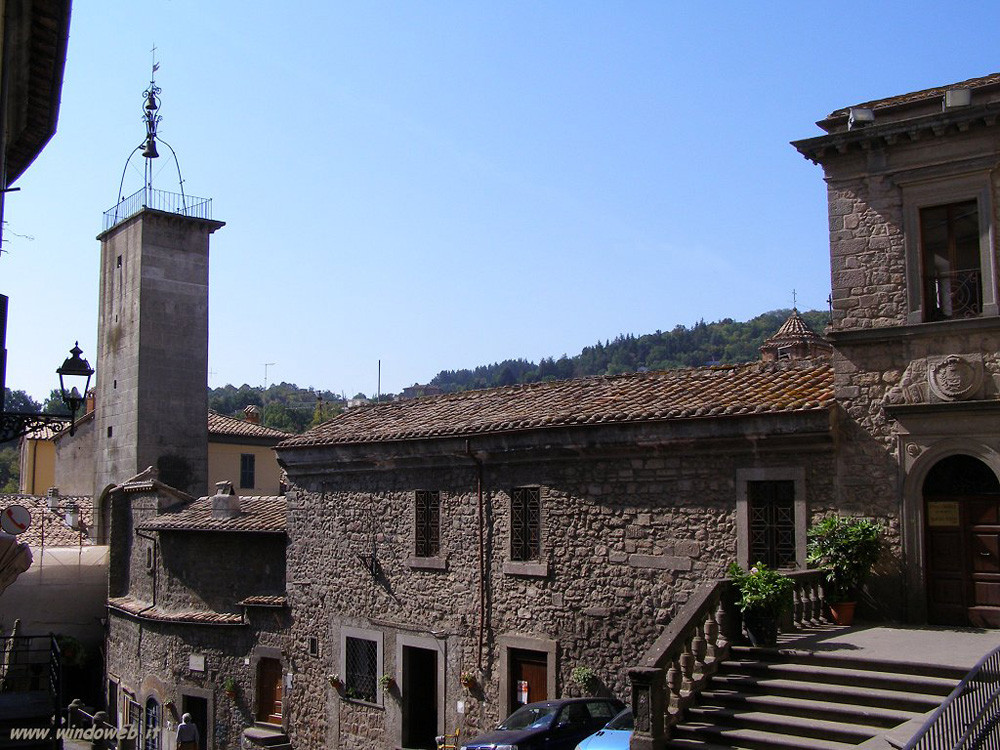 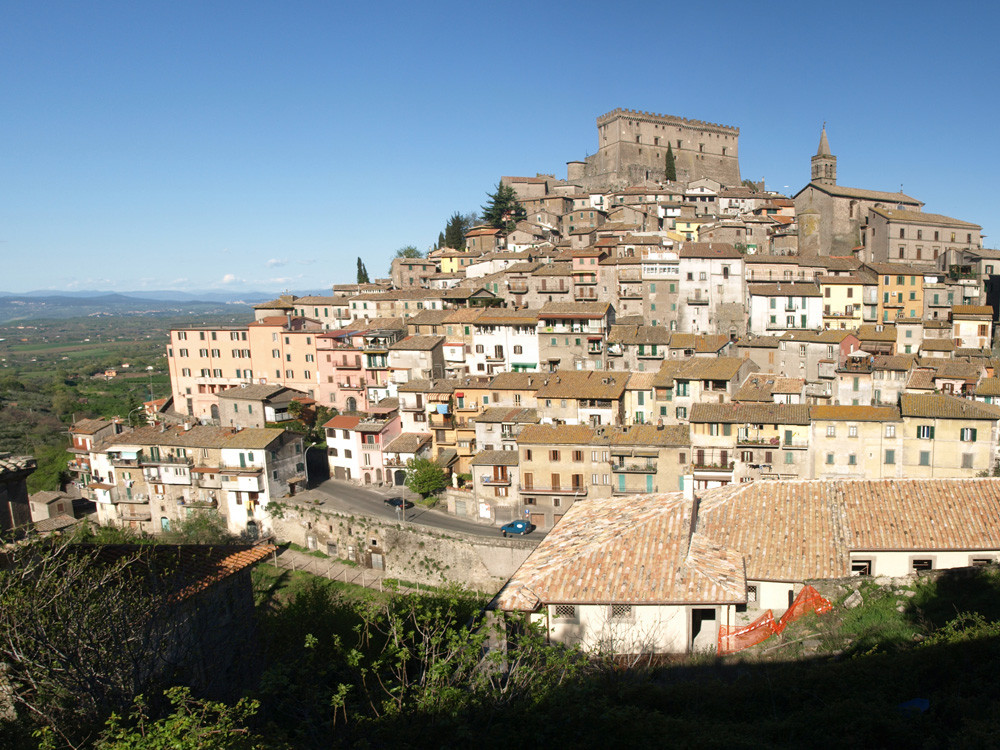 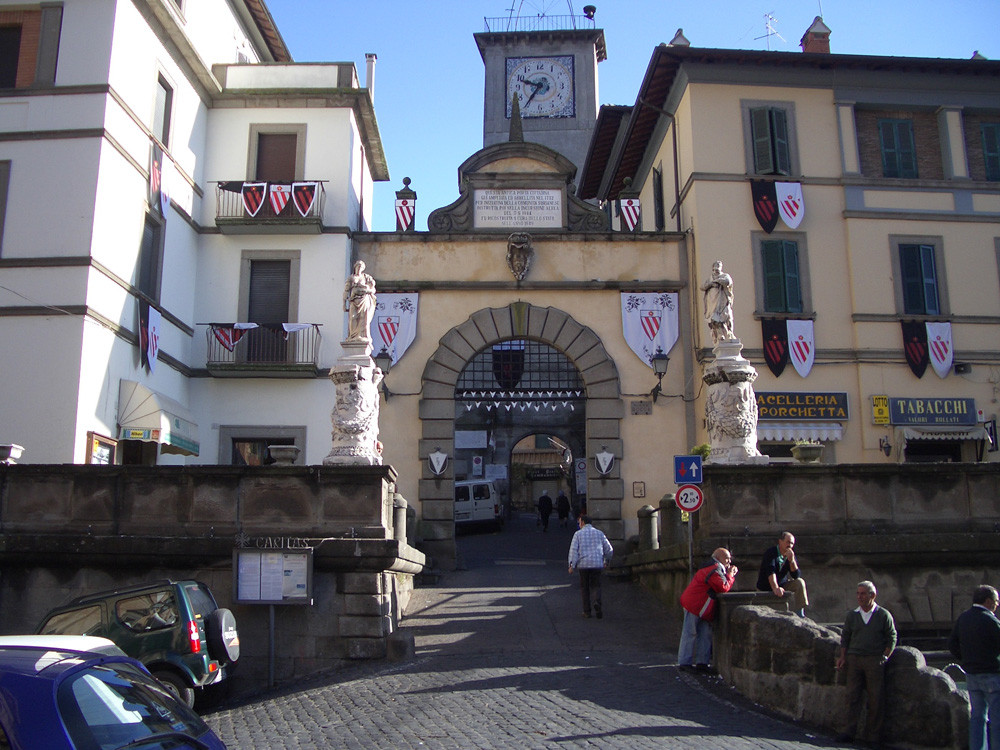 Soriano nel Cimino is an Italian town of 8,473 inhabitants [3], the province of Viterbo, in the Lazio. It is 15 kilometers from Viterbo and is the largest municipality in the district of Monti Cimini, in addition to being one of the most populous province of Viterbo.

One of the most important celebrations falls on June 5, where we remember the Allied bombing of Soriano, which occurred in 1944, during World War II, which hit the center of the country razing the tanning districts, New Square and Santa Rosa, severely damaging Collegiate Church and causing 188 deaths.

Mount Cimino (1053 m), which dominates the town, is the highest peak of the Cimini Mountains; It has on its top a centuries-old beech forest of about 57 hectares. The Faggeta of Monte Cimino is without a doubt the most majestic and imposing central Italy.

The Monte Cimino is the highest peak in the province of Viterbo and from its top allows to dominate the Tiber valley and all the surrounding villages.

To the ancient Romans the "Cimina forest" appeared like a gloomy place, sacred and impassable, and it is probably for this reason that in the Cimini mountains, were found the remains of ancient temples probably dedicated to Jupiter Cimino.

During the war against the Etruscans, to the Romans led by Quintus Fabius Maximus Rullianus console, was fundamental to climb the peak of Cimino, in fact, that undertaking, allowed them to see all the Etruscan camp still present in the Tiber valley and not yet fallen under the pressing Roman advance.

Soriano in the territory are primarily the flourishing cultivation of hazelnut and chestnut. The hazelnut cultivation is mainly localized in the eastern and southern slopes of Mount Cimino in the Lake Vico area.

The hazelnut is the kind Roman type and is used mainly in the confectionery industry and in the field of confectionery for the production of nougat, praline, hazelnut chocolate, fillings for chocolates and sweets or spreads. With nutty name of Cimini Mountains has been included on the national list of traditional Italian food products

Every year, in the first two weeks of October, the town celebrates the Chestnut Festival, a historical commemoration events. It is an event that has its roots far back in time, that lead back to the fifteenth century, in relation to a party set up by the Community Council towards the end of the fifteenth century. The modern festival sees the light in 1967 and is characterized by several events that affect the whole country.

Divided into four quarters (or districts): Papacqua, Rocca, San Giorgio and Trinity, Soriano wears medieval along all the streets of the country, that show different coats of arms and decorations with the effigies of the four districts.

The main event of the festival is the Palio of the districts, currently played at the Campo Giannotti, which pits an archer and a rider for each of the 4 quarters. The winner of the prize ward, receives the award right at the main square: Piazza Vittorio Emanuele II, at the end of the event.

During the course of the festival, each district showcases their performances, marked by a special exhibition; each district has its own group of musicians, consisting of drummers and trumpets musicians. Besides these the Trinity ward presents the Flag-Wavers, resulting in changes in the art of flag; the Rocca district presents the Historical Group Swordsmen, who performs in the art of the sword; the district of San Giorgio recalls the rescue of the virgin from the dragon by St George and the Papacqua district enacts the Inquisition witch.

The highlight of the festival consists of the Sunday of the second weekend, where each district has available for about 30 minutes Piazza Vittorio Emanuele II to showcase its historical procession, with clothing and means of medieval times, as well as the exhibition of musicians.

During the period of the festival each ward opened his own tavern, where you can taste the typical products Soriano made for the occasion by the people of the country, including the dumplings, sweets (dots) and meat grilled specialties.

Another event that characterizes the event is the awarding of the Golden Vojola (caldarrosta gold, in dialect): prize for many years is awarded to those who, in Italy and in the world, was marked by merit and ability in various fields (art, science, culture, literature, economics, politics, sports, etc.) and has a link with Soriano nel Cimino and favored, with its activities, the promotion of the country. Prizes are also awarded to the memory.

In these latest editions instead says ConviviumSecretum: a real historical culinary competition involving the four contradictions. The medieval and Renaissance historical dinners give you the opportunity to enter in a eno-gastronomic journey through the flavors and traditions of ancient times. You can visit the four taverns and taste typical dishes medieval or Renaissance, according to the historical period of membership of each ward. Among the dishes that you can find there are: capon fricassee French, typical Renaissance dish, fifteenth rabbit pie, white glutton ultramontane in the manner of 1300, confetti de melle appio and an apple pie in heaven and balcony limonia.