Ronciglione Places of artistic and landscape interest near Sutri 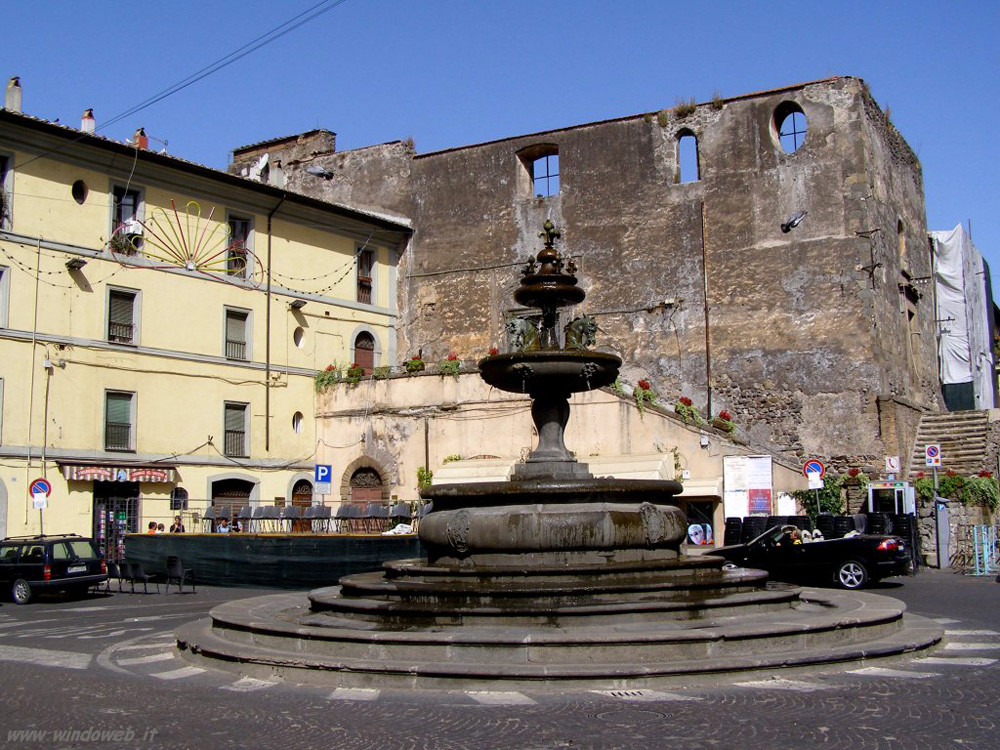 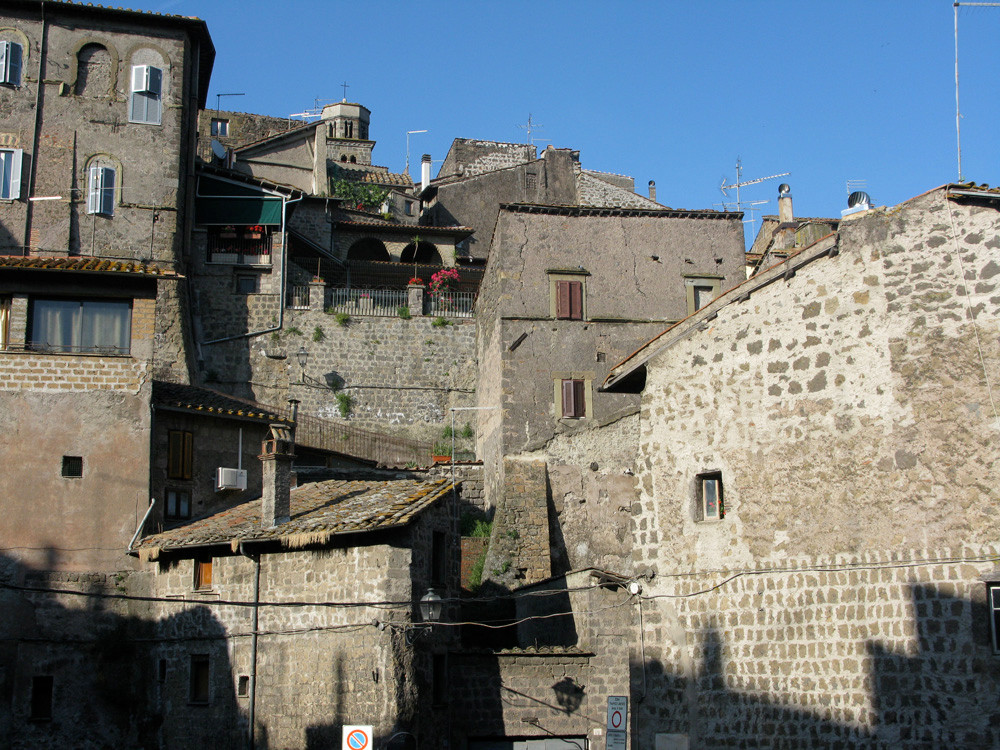 Ronciglione is an Italian town of 8,945 inhabitants in the province of Viterbo, precisely in the Tuscia, located along the route to the west of Lake Vico Via Francigena; from the capital is about 20 km from Rome and about 55 km.

Built on the edge of a cliff at the edge of the medieval village in the eleventh century, was originally known as St. Andrew's, it acquired its current name in 1742, when, during a massive restoration due to the collapse of the cliff on which it rests, was found a important fresco depicting the Madonna and Child, since, finished the funds for the restoration, this discovery allowed the pastor to receive new funds for the continuing of the work, was defined as a providence, and the main altar, gave its name to the whole Church.

In a couple of kilometers down the road to Rome, we can see the Romanesque church of St. Eusebius dating from the seventh century: the interior (three naves with columns topped by archaic capitals) there are some frescos, including The Last dinner (perhaps from the twelfth century), the Redeemer blessing with the Evangelists (XIII century) and a fifteenth-century Madonna and Child with Saints Stefano and Eusebio (additions in the seventeenth century).

The Cathedral, dedicated to Saints Peter and Catherine, big and majestic, was built in 1671 by Rainaldi design. In it are preserved many works of art among which the left altar, made of polychrome marble and decorated with a piece of Giuseppe Ghezzi depicting the Madonna del Rosario. Fine, finally, a triptych by Gabriele di Francesco depicting the San Salvatore blessing and placed right on the altar.

Realized, probably based on an old church called San Leonardo, in the twelfth century in the Gothic style, is currently remain visible only fragments of columns and marble capitals, the external structure and the bell tower erected by the Count of Anguillara Everso in 1436 by the hand Galasto the master. It consists of levels with windows in succession single-light, mullioned windows and an octagonal top floor, on the front portion of even this Church, made up of exposed stone, it is visible the emblem of Anguillara.

Built in the Middle Ages by Vico Prefects to guard the only natural access to the city, in the following centuries frequently changed ownership, destination and form. It was the prerogative of the Counts of Anguillara, the Della Rovere and Farnese from 1526 to 1649, under the Della Rovere owned the fortress underwent major changes, in particular between 1475 and 1480 with the restructuring desired by Pope Sixtus IV and entrusted to 'Florentine architect Giovanni Dolci who added the circular tower and the four fortified towers at the corners, which also gave the castle to the current popular name "the Torrioni".

Sojourned eminent personalities such as Pope Sixtus IV and Pope Paul III, but he went on, in 1649, in the hands of the Holy See, which transferred it in 1756 to Genoa Marè Girolamo, who, while committed to its preservation and embellishment , he left her in a state of neglect.

Finished in 1552, in 1744 it was renovated and added there was a clock designed by the architect Sebastiano Cipriani, from 1816's municipal administration, which previously was space in a medieval palace. Inside it houses a Roman sarcophagus.

Popularly attributed to Vignola (architect of the nearby Palazzo Farnese Caprarola, actually was also commissioned by Cardinal Alessandro Farnese, who also had the Palazzo Farnese), but the architect Antonio Gentili from Faenza.

Built of sandstone, it has three unicorns (often called "sea horses") from whose mouth flows the water that fills the two lower tanks.

Built in 1618 by Duke Odoardo Farnese by Vignola currently divides the historic center of the town from the south, was often subject to changes, in 1857 for example was added on top of a tower equipped with a clock that was later removed in 1954 to lighten the load on the structure.

This is the house, now converted into a museum by the faithful of Mariangela Virgili, Tertiary Carmelite Ancient Observance, on which the person is an ongoing process of beatification.

The palace of Virgili, situated in the most characteristic Piazza degli Angeli, in the medieval village, with the coat of arms on the front of the main entrance, with a Renaissance window, the oldest remains of a mullioned window and a staircase, is one of the most interesting monuments of the historic center of Ronciglione Virgili in the seventeenth century the family was impoverished and the second floor of the building was inhabited by the Venerable family. There is still the cell (= wooden fence) where it lived and died. In his house the walls are covered with an unusual upholstery: you can in fact see several hundred former silver vote representing hearts, eyes and other body parts; then tablets and votive paintings, albums with photographs of ordinary people and soldiers of all wars, including those of current contingent in the peacekeeping mission. Of the numerous registers, with the signatures and dedications of visitors, some vicissitudes now there are only five. The oldest dates back to 1910.

Of great interest, located north of Ronciglione, Vico lake is probably the best preserved among the great Italian lakes of volcanic origin. Included among the areas of special natural value of the Lazio, between the biotopes of vegetation interest in Italy and part of the Natural Reserve of Lake Vico, it enables the development of the life of many rare animal species.

Trained by filling a volcanic crater was seen half the surface in the Etruscan era with the construction of a culvert that crosses the mountain and throwing the waters of the lake in the valley forming the Rio Vicano, allowed to make a big fertile land.

But what makes this famous carnival are the colors of the Gala course, the viability of the participants and especially the Vacuum Corse.

A Ronciglione courses are annually two Palios of empty runs, the Palio Della Manna, as part of the Carnival of Ronciglione, in honor of an ancient and generous local family, and the Palio di San Bartolomeo, in honor of the patron saint of the country , in August.

Like the Palio di Siena, the races having the character of a derby contest. The nine districts of the city each have two horses, who compete for prizes in two days of racing. The first day of the eighteen horses run in three ' "careers" (batteries) separated by six horses each, the first two in each heat and two drawn between third classified will compete on the second day, in the final battery of eight horses.

The horses run shaken (riderless) along the renaissance streets of the village, on a mixed path, made of asphalt and cobblestones, past a narrow door, canton of gricio, considered particularly difficult, and the difficult ascent of Rosskopf. The horses are trained throughout the year from nine rival teams.

The races vacuum Ronciglione were the subject of the animal rights protests because of the high number of accidents involving horses, sometimes deadly, due to a pavement pavé poorly suited to the animals, the speed at which they are trained to run and to doping substances, as was demonstrated in the nineties, they were often used today doping controls are very strict and regulated by the UNIRE.

5 March 2011, during qualifying of empty runs, a horse crashes into the metal barriers, recidendosi the jugular. After many fits and copious blood loss, workers have wrapped the body of the dying horse with a cloth so as not to witness the painful spectacle. The poor animal died shortly after in the town center in front of horrified spectators, where the incident had occurred.

Feast of St. Mary of Providence

The origins of the name and of Providence festival of "Santa Maria" are linked to an incident that occurred in 1742 and of which he was the protagonist Father Angelo Ferretti, nephew of Venerable Mariangela Virgili, who, remembering a prophecy of her aunt, after the death of this, had undertaken the restoration of the church collapsed. Persuaded to find the "treasure" of which her aunt had spoken, June 9 under the ax of gold instead of masons and silver was discovered an ancient frescoed Madonna. He realized then that this "treasure" talked his aunt and, to the delight, began to shout "Providence, Providence" so as to hasten all the people of the village. From that day the church was called St. Mary of Providence, or Our Lady of Providence. It was June 9, 1742, as stated on a stone came to light in 1955. Since then, the first Sunday of June, to celebrate the event, in all families of the villages it consumes a day meal made potato gnocchi . Of all these reports we are reflected by reading the life of Venerable Mariangela Virgili, born and raised in Ronciglione 1661-1734.

Over the years, the date of the festival was moved several times until you get to the first Sunday in August. To manage the party is, as always, the Brotherhood of St. Mary of Providence, which, under the leadership of the governor, Charles Trappolini, grew in importance and prestige. His successor was Oreste Marini, said Sandro. He gave further impetus to the event and began to taste the potato dumplings to the people who attended the party. Thus the "Gnoccata" was born. Today cure the festivities, which last five days, in addition to the Brotherhood's Cultural Association Mariangela Virgili that, with cultural, popular, artistic and sports, has given the party a national resonance.

jazz festival, among the most famous on the national scene, Which is held every year in Ronciglione during the Easter holidays. During the festival they are also held educational seminars with leading musicians on the international scene. Concerts are held at the theater Petrolini, the Hall of the College and at the bars and restaurants of the city. Many musicians who have taught and performed at the festival.